Tran Quoc Toan is known for his story of crushing an orange when he was not permitted to attend the Binh Than Conference because of his young age, then Tran Quoc Toan gathered his servants with more than 1,000 people into an army, under the rule of Commander-in-chief of the armies Tran Hung Dao against the Mongol invasion for the second time in 1285. The army of Tran Quoc Toan was famous in history with an embroidered flag of 6 golden characters "Phá cường địch, báo hoàng ân - Defeat the strong enemy to repay the Emperor's grace”. 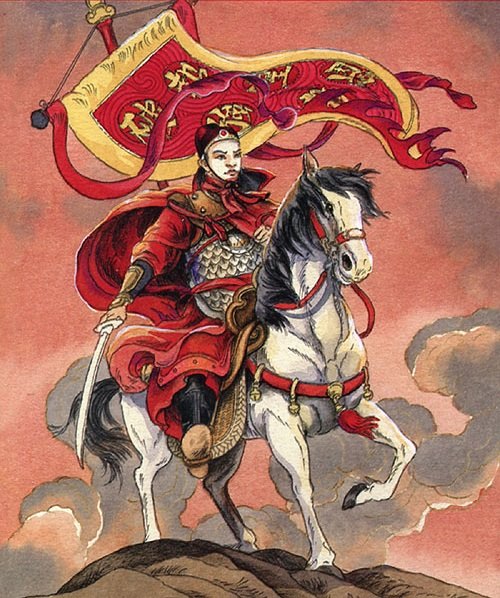 Tran Quoc Toan with the embroidered flag of 6 golden characters

According to a number of history books, Tran Quoc Toan died in a battle with the Mongol Yuan army for the second time, leaving much regret for the Country and the Dai Viet people at that time ..!

Tran Quoc Toan is the son of Tran Nhat Duy, King of Vu Uy, and Tran Y Ninh. He is the grandson of King Tran Thai Tong. After the Tran Dynasty defeated the Yuan army for the first time (in 1258), King Tran was worried that once the Yuan army defeated Song Dynasty, it would widen the way to continue fighting against Dai Viet; therefore, he sent Tran Nhat Duy and his wife, Tran Y Ninh, together with a number of generals to help Song Dynasty.

In the inevitable danger of Mongol Yuan invasion, in October 1282, King Tran Nhan Tong summoned the Binh Than Conference to discuss the direction of resistance, to recommend and decide personnel for the resistance when Mongol Yuan attacked Dai Viet. This conference included mandarins and princes and was chaired by King Tran himself. Due to being 15 years old, the Marquis Hoai Van was not invited to attend the Conference. However, he still arrived at Binh Than wharf, demanding to attend the Conference. Being stopped by guards, the Marquis Hoai Van asked:

Considering the noise outside, Tran Nhan Tong asked to know what happened, so he gave the Marquis Hoai Van an orange and advised the Marquis Hoai Van to go back and continue to review and practice martial arts, it will be used and now not yet the age to discuss the vital issues of the Country. About this story, Dai Viet history books were written as follows: King found that the Marquis Hoai Van, Tran Quoc Toan, Hoai Nhan, Vuong Kien were still young; therefore, he didn’t allow them to attend the discussion conference. Quoc Toan was in an indignation, holding an orange, crushing it without knowing it.

Returning from the Binh Than Conference, the Marquis Hoai Van was still determined to find ways to fight the enemy to save the country. The young man with a muscular body because of practicing martial arts early, gathered more than 1,000 of his family members, servants, boys and gentlemen in the area, prepared weapons, stored the food, and practiced martial arts and drills. Tran Quoc Toan also embroidered on a big flag 6 golden characters: "Phá cường địch, báo hoàng ân - Defeat the strong enemy to repay the Emperor's grace”. Under the direction of Tran Quoc Toan, he and his army had carved out the words "Sát Thát - Killing Mongol Yuan Army" which means "to sacrifice in the battle, to swear not to breathe the same air with the enemy, absolutely No surrender".

Appreciated by the loyalty and courageous spirit of the young Marquis Hoai Van, when King Tran Nhan Tong approved his plan to establish the plan of empty houses and gardens, he withdrew the whole army from Thang Long Citadel, the king let the Marquis Hoai Van follow to protect him.

Touching Piety of the you­ng hero.

On the morning of the journey to the battle, the scene when the Marquis Hoai Van said farewell to his mother has circulated forever into anecdotes. 15-year-old child got up early, prepared his horse, put on his war uniform, pull out the chair to make it available in front of the terrace; he went to burn incense to worship the Ancestors, then invited his Mother to sit on the chair, kneeled and bowed to her and said that; "This time, I go to fight against the enemy, when the country, the land of Dai Viet is peaceful, I will return to serve you for the rest of my life."

This action is enough for each of us to feel that the piety of Tran Quoc Toan to his parents is boundless.

He fought against the enemy until his last breath, and written an immortal epic of infinite patriotism.

In this young General, there is a beautiful, noble unity between the faithful and filial piety.

It is thought that Ton Duc Thang University students with the spirit of dedication, sacrifice, and service cannot lack the cultivation and training of those noble moral qualities.

The example of Marquis Hoai Van - Tran Quoc Toan was 735 years away from us but still a bright lesson about the Faithful – Filial Piety for the young generation of Vietnam in general and TDTU youth in particular.

The Faithful – Filial Piety of the Marquis Hoai Van will forever empathize with people and will never fade with time ... to forever praise the hero of the teen.